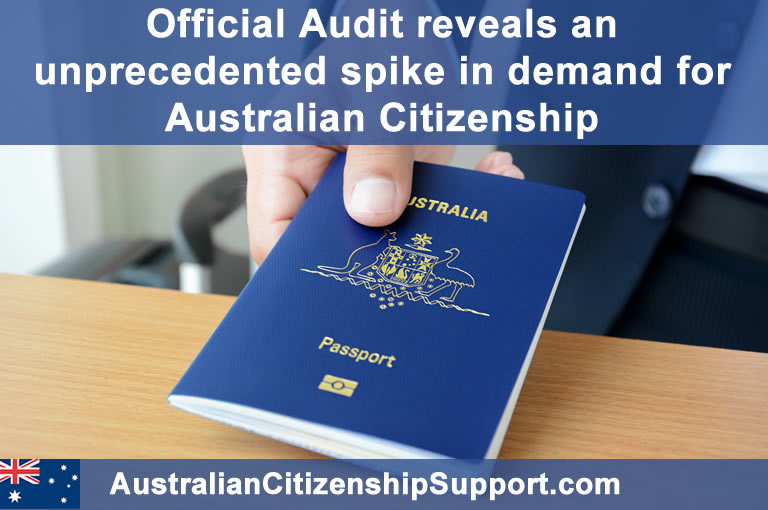 After concerns raised by the commonwealth ombudsman and members of parliament about the duration of the citizenship application process, the government conducted an audit into Peter Dutton’s Home Affairs department.

The audit found that the impact of failed reforms, the increase in the number of complex cases and the “increased integrity screening checking processes” have been the most significant factors in the backlog of applications.

Back when Prime Minister Malcolm Turnbull announced new stricter measures for individuals applying for their Australian citizenship in April 2017, the amount of applications rose suddenly but were not processed because the department anticipated they were going to be subject to the new laws that were yet to pass parliament. Nevertheless, the legislation failed to pass the Senate.

While approvals for Australian citizenship by conferral – applications by current permanent residents – have increased since July 2018, the backlog of applications last year reached 259,815 (93% of those applications were by conferral, the rest by descent, adoption and resumption) a near 50% increase from the previous year.

Just 15 percent of citizenship applications by conferral were within the government’s target time-frame of 80 days in 2017-18, and the target itself has been removed.

Home affairs claim that the enhanced integrity measures recently adopted by the department to protect Australia’s national security and safety in communities are delivering results and they will always prioritize these efforts over speed.

Labor MP, Mr. Hill stated that he does not accept the increased security measures as an excuse. Most of the people applying for citizenship are “people with good supporting documents who arrived in Australia on a skilled visa.” They are people who have been here for four to 10 years and love Australia.

The Home Affairs Department has since established a task force that focusses on complex citizenship cases- one of the main factors held responsible for plummeting citizenship approvals last year. An investment of $9 million is being made in the recruitment and training of extra staff to ensure citizenship applications will be handled as efficiently as possible.

Why do people realize more than ever the importance of obtaining Australian citizenship?

It seems like many people including permanent residents are feeling the urgency to acquire citizenship because it makes them feel more secure, connected to the community and like they belong in Australia. Citizens have better access to job and career opportunities, can vote and have a say in the government process.

How can we help you in the process of becoming an Australian citizen?

If you are interested in becoming an Australian citizen, please view our Australian Citizenship Test – Complete Online Training Program.

Read these articles to prepare for your Australian Citizenship Test

Australian citizenship test: how to prepare for it?