Australian citizenship ceremonies will be held on Australia Day despite opposition 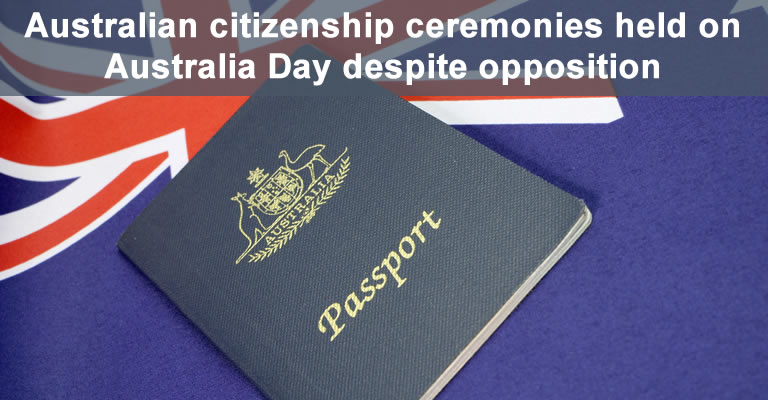 Growing movement to change the date for Australian citizenship ceremonies

There has been a growing movement over the years to change the highly contentious date of Australia Day. Aboriginal and Torres Strait Islanders consider the date ‘Invasion Day’ as it marks the first-day British fleets arrived in Sydney Harbor and started colonizing Australia, resulting in first nations people losing their lands and culture.

Support for the ‘Change the Date’ campaign is becoming more mainstream. Proponents include Indigenous and non-indigenous people, as well as some local councils, and the Green Party.

Many supporters feel that this growing movement shows that people are changing their hearts and minds, which is a real sign of reconciliation.

In sharp contrast, the conservative government opposes the campaign saying that it is divisive and attempts to deny or erase Australia’s history, as expressed in past statements by Mr Turnbull and Prime Minister Morrison. They seem resolved to protect and preserve the date as January 26.

Out of respect for the First Nations peoples, some local councils such as Launceston council, and Hobart council have tried to move citizenship ceremony celebrations to January 25. These actions have been met with opposition from the Federal Government.

Academic Kim Rubenstein questioned whether the new code is in contravention of the Australian Citizenship Act, which states that Australian citizenship pledges are to be governed by measures stated in regulations. Contrary to those regulations, the new code is not prohibited by the Senate, allowing the executive branch to make rules for ceremonies without parliament oversight.

The Australian greens have heeded on Rubenstein’s advice that federal regulations ordering citizenship ceremonies on Australia Day may be unlawful, calling on the Local Government Association to consider taking legal action.

The Greens consider the date of Australia Day as more divisive than unifying. They are digging their heels in even deeper to change the date since the new code on citizenship ceremonies was introduced. The aim is to change the date to a less contentious Day. One that is more inclusive, so that all Australians can celebrate in harmony all the wonderful things about Australia and being Australian.

There are many reasons to celebrate being an Australian citizen

Whether you take your oath of citizenship on Australia Day or any other day, becoming a citizen of Australia is a reason to celebrate. Many rights and freedoms come along with getting your citizenship. You can travel in and out of Australia freely. Many feel a deeper connection to community. There are more and better job opportunities and greater income earning potential. You can vote in elections! The list of perks goes on and on.

Do you need help with becoming an Australian citizen? 🇦🇺

Before applying for citizenship, applicants are required to pass the Australian Citizenship Test. This test will assess whether applicants speak and understand a basic level of English and have a sufficient understanding of Australia and of the rights and responsibilities of being an Australian citizen.

If you are in the process of applying for Australian citizenship:
👉 please visit us: https://www.australiancitizenshipsupport.com/